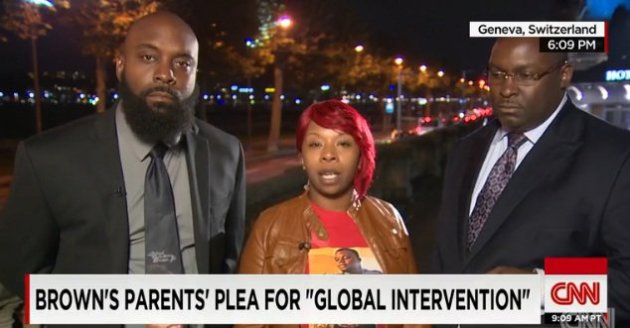 Any day now a grand jury will announce whether or not they will charge Darren Wilson with the August shooting death of strong-armed robber and thug Michael Brown. All indications are that the police officer was justified and will not face criminal prosecution for the self-defense killing. It is also extremely unlikely that the US Justice department will file civil rights violation charges in the case.

Unwilling to accept that their son was responsible for his own death, Brown’s parents went before the United Nations to demand that the largely symbolic organization arrest Officer Wilson for torture and human rights violations.

Armed with the kooky notion that the UN somehow has authority over the United States, Lesley McSpadden (angry mom) and Michael Brown Sr. (proud papa) spoke to the United Nations Committee Against Torture in Geneva, Switzerland today.


McSpadden didn’t say anything about the investigation into her own violent robbery, but was quite vocal to CNN about her violent robbery suspect son:

Wow, she’s a needy one, isn’t she? Instead of constantly taking from society, like her son did, why not give a little something back?

Brown’s parents gave testimony to the UN committee behind closed door, but reportedly read a statement prepared by a variety of race hustling organizations. According to CNN the statement appealed to the committee’s interest in government abuse and torture:

The document says Brown’s killing and force used by police officers during protests that followed the killing “represent violations of the Convention against Torture and Other Cruel, Inhuman or Degrading Treatment or Punishment.”

It requests that the U.N. panel recommend the immediate arrest of Officer Darren Wilson, who killed Brown, as well as an end to “racial profiling and racially-biased police harassment across the jurisdictions surrounding Ferguson.”